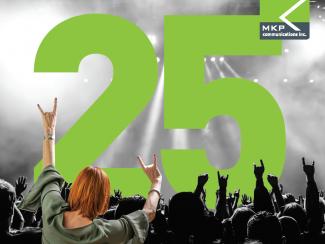 25th Anniversary Interview with HDK - Part 1: The beginnings of MKP

In celebration of our 25th year in business, here are some thoughts and recollections from Hillary Kelbick, our President and CEO.

Why did you decide to start MKP?

In 1994, I was working as a senior account executive at a communications firm. I had two young children at home, and while I wanted to stay in the work environment, I didn’t want to miss the big moments  -- soccer games, school plays, recitals, all the other kid-focused activities.

In those days, it was more difficult to be both a mother and a woman who was  taken seriously in the business world. Working from home was uncommon, especially in a client contact position. So I think the inspiration to start MKP was to have a fulfilling career and more freedom and flexibility in my day-to-day life. I wanted to “have it all.”

What was your plan starting out?

We didn’t have one!  I know it sounds funny today, when business startups tend to be so carefully choreographed. But no, we really didn’t have a start-up plan at all. I just teamed up with a wonderful friend and close colleague, who became my partner throughout the early days of MKP. We had 15 years’ worth of contacts, most of them in the banking industry, along with all the energy and chutzpah in the world. We were going to go at it with all we had, and we really weren’t afraid of failure. I think we knew that if things went south, we could always land other corporate jobs.

I’ll tell you, the excitement that we were met with as this business started to unfold was absolutely amazing. Right from the start, clients were very willing to hire us. Initially, the projects were small, but we took them gladly, and it was a matter of continuing to prove ourselves and build relationships little by little. Plus, it was a good time to start a woman-owned business. I got a lot of support from female clients, from female vendors. It really meant a lot.

Was there a turning point when you thought, “Wow, this could really work?”

One day we got a call from First Union Bank, which was one of the largest, most dynamic banks in the entire Southeast at the time. They were acquiring another large regional bank, First Fidelity, which would increase their footprint dramatically. And that become a defining moment in the history of MKP. We were less than a year in business, and we were given the opportunity to pitch MKP to manage communications for the biggest merger in US banking history at that time. Can you imagine? We had fewer than ten people on staff, and some of them weren’t even working for us full-time! Pretty unbelievable.

I’ll never forget the day we went down to First Union to present our strategic plan. We were led into a huge conference room, the table looked like it was 30 feet long and it was already filled with people. Both walls were lined with chairs for spillover attendees. I’ve never presented to such a big group, for such big stakes. Turns out, I thrive in those situations. Who knew?

It was the most improbable thing imaginable. We beat out much bigger agencies with much more experience. And not only did we get the job done, First Union ended up giving us their Corporate Supplier of the Year Award. To give you an idea of how big that award was, the previous year’s winner was FedEx, which had something like 100,000 employees at the time. And the next year, MKP won. All ten of us!

Yes!  It really wasn’t a plan, it was question of the right assignment landing with the right team at the right time. And then when we finished, it was like, Wow, what's next? And lo and behold, another large acquisition was announced and we figured, let's go for another one. Following the success of the First Union merger, we landed the opportunity to execute merger communications for two very strong Boston banks, Bank of Boston and BayBank. And then, when the resulting bank was bought by Fleet Bank a few years later, we handled that one too! That was a huge merger, very complex. We became merger specialists by managing some the biggest mergers ever!

But there’s a lot more to MKP than bank mergers, right?